Jesus only lived on earth for just over thirty years, but Christians believe that God has left them with various gifts to grow in their faith and obedience to God’s will. Jesus himself promised another helper, ‘the Holy Spirit’, to be God’s continuing presence and power with his followers. Christians also believe that God has left a unique written revelation of his character and purpose in the Bible and can speak to us particularly through its pages. Therefore, both the Holy Spirit and the Bible have a central place in our journey with God. In addition, God never intends us to struggle on our own as Christians, but to be linked up with the church, that fellowship of all those who have responded to his call through time and history and which still is expressed in many visible communities of faith today.

Sometimes the number of different churches and the ways they disagree can put us off wanting to be part of them. It certainly shows that Christians are not people who have it all sorted, know all the answers or live perfect lives. However through the years, time and again Christian influence has been an active source of good in the world, motivated by the love and grace of God that Christians have come to experience.

St David’s Church is part of the Diocese of Leicester that belongs to the Church of England.

If you’d like to explore Christianity further, please contact any of our Clergy or have a look at www.christianity.org.uk. 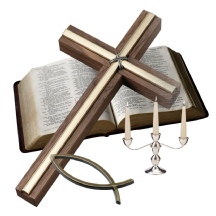 “I have come that you may have life, and have it to the full.” Jesus Christ (as recorded in the Bible; John’s Gospel, chapter 10, verse 10)

Christians believe that, in Jesus, God revealed himself as a human being, living on earth. His life and teaching have been admired by millions, and have formed the moral basis of much of our culture and society ever since. But Jesus did not see himself just as a good moral teacher, but spoke of a new kingdom breaking into history which centred on him. What was even more unexpected was that, having been put to death by crucifixion at a young age, his followers were soon proclaiming that he had been raised from the dead and had appeared to them. His death and resurrection, they said, had given the human race a fresh start enabling people to be reconciled in their relationships with God and each other and to find forgiveness for the ways they had messed up.

The early Christians were just ordinary, fallible people, who became fired by the conviction that God accepted and loved them and wanted to use them in the service of his kingdom. Some were martyred for their beliefs, but then their hope was not confined just to life in this world, but to a transformed existence beyond death.